How to Become a Pilot in Vietnam 2021

You probably have a multitude of questions when it comes to qualifications, duration, and requirements necessary for pilot training in Vietnam. Fret not, as we, at Aviationfly, have compiled the most basic things you need to know when planning to take your pilot course/program in Vietnam.

But before we walk you through the following step-by-step guide, did you know that Vietnam, with its population of 96 million people,  has four (4) big airlines and a number of smaller airlines. Well-known airlines such as Vietjet, Vietnam Airlines, Jetstar Pacific and Bamboo Airways have all ordered a large number of airplanes that will need more pilots to fly them. Vietjet has hundreds of aircraft on order both from Airbus and Boeing and will need thousands of new pilots over the next few years. The Airlines in Vietnam will have a preference for Vietnamese Nationals. Nevertheless, this is open to international applications and because of this, there is not a better time to start your pilot training than now!

However, currently, only Pilot Simulator Training Centers are available in Vietnam. Vietnamese nationals have to do their initial pilot training abroad.

Aviationfly has helped many aspiring pilots just like you become a pilot with our step-by-step guide below. In this page, we will walk you through all the steps that you need to take into consideration when pursuing your dream of becoming either a private pilot, commercial pilot, or an airline transport pilot.

Step 1. Do research on the available flight training options in Vietnam

You need to know what pilot training programs are being offered in the country and which among those is the most suitable for you. This is where you should take into account what is your aviation goal. Do you want to obtain a Private Pilot License (PPL) or a Commercial Pilot License (CPL). Are you seeking to work for an airline? If yes, then an Airline Transport Pilot License (ATPL) is for you. Do you aim to attain a college degree at the same time too? Or do you see yourself joining the military, particularly the Air Force?

Did we lose you? Don’t panic! If you’re not familiar with the terms or can’t choose which license is the right for you, you can send in your questions and our team will be happy to help you out.

Here are your options

Currently, there are no initial pilot training schools in Vietnam. Only Pilot Simulator Centers are available as of this writing. Hence, Vietnamese Nationals have to do their pilot training abroad. Now, it is important that you create a list of your preferred flight school/s abroad so you can compare which is fitting for you. Each school has its own procedures, enrollment requirements, and depending on which pilot training courses you decide to take, the tuition fee also varies. There are only a few Pilot Schools in the world approved by the CAAV and Aviationfly.com can connect you with the right ones (click the yellow CONTACT US button).

Meanwhile, if your greatest childhood dream is to become an airline pilot, you should consider airline cadet pilot programs. Airlines often sponsor these programs and students are guaranteed employment upon course completion. In this pilot program, you will obtain an Airline Transport Pilot License (ATPL). You can reach out to us to get an insight on the options currently available.

Finally, if you’re interested in serving your country, you can join the Vietnam People’s Air Force. The Government will sponsor your flight training but you will have to stay with the military for around 12 years  after completion before you can apply to commercial airlines.

Step 2. Look up the Basic Requirements

Step 3. Decide on which training stages you will have to undergo

In general, there are five (5) different pilot training stages in which students need to complete depending on what their goal is. The stages of pilot training are as follows:

The first pilot license you will need to obtain is a student pilot license. This license allows you to start your flight training. To get a Vietnamese student pilot certificate, you need to be at least 16 years old, and able to speak, understand, read, and write in English language at the minimum level required by the Civil Aviation Authority of Vietnam (CAAV).

i)  at least 20 hours of flight training from an instructor;

iii) 5 Solo takeoffs and landings to a full stop

Both 4 and 5 are add-ons to your pilot license…

Being instrument-rated means that you can fly the aircraft in any weather condition (for example low or zero visibility) using just the instruments. Flight schools offer Instrument Rating along with their commercial pilot training. But this can also be obtained separately.

This is the highest level of Pilot License both in Vietnam and globally. The license is a requirement if you want to be a Captain (in command) of a multi-crew aircraft (like a commercial airline aircraft). To get an ATPL, you must:

If you have any questions so far, feel free to use chat messenger to send us a message.

After doing your research on the type of license you would like to obtain, the next step is to choose which flight school is the most suitable for your budget.

So, how much does pilot training cost?

It is important to note that becoming a pilot requires a certain budget. The minimum is around US$60,000 and higher. Your flight training cost depends on the country you do your training, the flight school you pick, and a number of other factors.

You can find a list of flight training institutes in the United States, Philippines, Indonesia, New Zealand, and Australia, where most Vietnamese do their pilot training, by registering with us on Aviationfly.com. Our flight school directory has a list of all the latest active flight schools in these countries including their brief background, pilot training courses being offered, the school’s fleet details, what they can offer to you, and other information. It takes an average of around 2 years to obtain a commercial pilot license in CAAV-approved flight schools abroad and costs around US $60,000. Following the training, you will have to convert your license to the Civil Aviation Authority of Vietnam.

Many aspiring pilots have a defined career path they would like to pursue, while others don’t. Below is a list of options for what you can potentially do with a pilot license.

A frequently asked question is: how much does an Airline Captain in Vietnam make? The short answer is an average of VNĐ229 million (US$9,946) per month*!

**This/these number/numbers is/are based on available data and research conducted in the year 2019. There is no guarantee that the number/s provided is/are accurate. Please read our Disclaimer.

Tips for Picking a Flight School

Tip 1. Decide on your pilot goals

Firstly, ask yourself – what are your long-term aspirations in aviation? Do you want to become a pilot in your free time (Private Pilot License)? Or do you want to fly in General Aviation (Commercial Pilot License)? Do you want to become an airline pilot through an airline pilot cadet program? Additionally, which airlines are currently hiring? What type of aircraft will be utilized by airlines in the next few years? Which flight schools do the airlines usually hire from? Best to ask flight schools if they have partnerships with airlines. These are critical questions you should list and get answers to when asking yourself “how will I become a Pilot”.

Tip 2. Determine how much you can afford to spend

Secondly, different flight schools have different costs (due to location, number of students, aircraft type and several other factors), find out the reasons for the price difference. Moreover, do these programs have financial assistance/loan programs? Might a part-time program work for you?

Tip 3. Determine how much free time you have

Tip 4. Find out what type of aircraft the flight school uses and information of its aircraft maintenance center

This is important from a training point of view, but even more importantly, from a safety aspect. Furthermore, you should also take into consideration the equipment preference of airlines. Aircraft age does not always relate to safety, this is dependent on the aircraft maintenance – ask the flight school in detail about their aircraft maintenance department and safety features of the aircraft.

Finally, when possible, speak to the instructors and flight school management teams to learn about the training, safety policies, history, and graduates of the flight school.

Do you still have questions? Send us a message!

You can also check out How to become a Pilot in the Philippines or other countries by navigating on our platform or simply just reach out to our team through chat.

Step-by-Step Guide on Becoming a Pilot in Vietnam 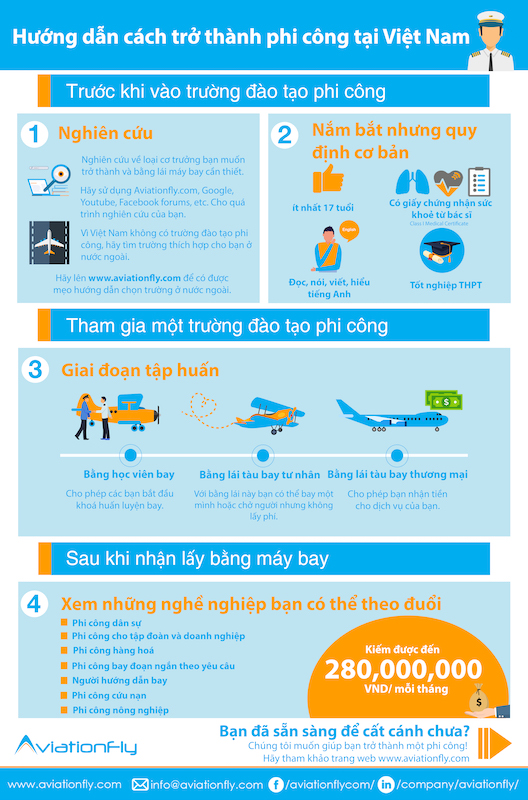